University of Agricultural Sciences in Bengaluru planned to host the 107th Indian Science Congress from 3rd to 7th of January. Prime Minister Narendra Modi will inaugurate the conference to be attended by over 15,000 delegates, including Nobel laureates, scientists, academicians, students, farmers, among others. Indian Science Congress Association Prof. K S Rangappa informed in Bengaluru today that 1,500 scientific papers and 5700 posters in 14 scientific disciplines.

There are 26 plenary sessions for the science buffs. Women, Farmers, Children, and Science communicators have exclusive deliberations during this science congress. Pride of India exhibition has 130 participants exhibiting technologies, machinery, equipment, and science models. Farmers congress organized for the first time. The main focus on innovation in integrated agriculture entrepreneurship, climate change, biodiversity, agrarian distress, rural bio-entrepreneurship, and policy issues. The three Technical Sessions on Agriculture around ten innovative farmers will present their views. ISCA introduced a comprehensive mobile app ISC 2020 UASB to provide details of all the sessions.

A female black rhino, Fausta, who was believed to be the world’s oldest rhino has died at the age of 57 in a Tanzanian conservation area.

The records showed that Fausta lived longer than any rhino in the world.

This has been achieved due to better work in water and sanitation, affordable and clean energy and industry, innovation, and infrastructure.

Kerala achieved the first rank in the composite SDG Index with a score of 70, followed by Himachal Pradesh at 69.

Andhra Pradesh, Telangana, and Tamil Nadu ranked at the third position with a score of 67.

The states showing the biggest improvement since 2018 are Uttar Pradesh which has moved from the 29th position to the 23rd, Odisha from 23rd to 15th and Sikkim from 15th to 7th position.

The total tree and forest cover in the country increased by 5,188 square kilometer in the last two years, said the India State of Forest Report 2019.

The top three states in terms of forest cover are Karnataka, Andhra Pradesh and Kerala.

While Karnataka grew the maximum forest-and-tree cover at 1,025 sq km, Andhra Pradesh grew a 990-sq km cover and a 823-sq km of forest cover was created by Kerala in the last two years.

The eBkray platform provides navigational links to all PSB e-auction sites, property search feature and presents single-window access to information on properties up for e-auction, comparison of similar properties, and also contains videos and photographs of the uploaded properties.

Indian Banks Auctions Mortgaged Properties Information (IBAPI) portal is an initiative of Indian Banks Association (IBA) under the policy of the Department of Financial Services (DFS), Ministry of Finance.

SBI to launch OTP-based cash withdrawal at all its ATMs from January 1, 2020, onwards

The State Bank of India (SBI) will switch to a one-time password (OTP) based cash withdrawal system at all its ATMs from January 1, 2020, onwards.

With this latest move, the lender aims to ensure the protection of its customers from unauthorised transactions at ATMs.

The new OTP-based ATM withdrawal will be applicable for transactions above Rs 10,000, between 8 pm to 8 am.

Customers withdrawing cash from SBI ATMs will receive an OTP on their mobile number registered with the bank.

However, the facility won’t apply in case of transactions made by SBI cardholders at any other bank’s ATM.

National Symposium of Poets 2020 organized by All India Radio. This poet symposium attended by select poets of all 22 languages recognized in the constitution. It is held continuously every year since 1956. The country gave their presentations and captivated the hearts of the people.

The national symposium is organized every year and broadcast on the eve of Republic Day and at all the centers of AIR. The special conversation with AIR News, senior litterateur Dr. Chitra Mudgal the events unify the country. 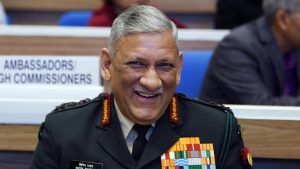 Defence Ministry amended the army, air force, and navy rules by bringing in a new clause that allows the CDS to serve up to a maximum age of 65 years. The CDS will administer all tri-services organizations command will be with the Chief of the service. Chief of the Defence Staff (CDS) is a position for the tri-service chief of the Indian Army, Navy, and Air Force, with the first CDS being General Bipin Rawat.