ISRO sets up academic centre in Karnataka to provide 2 crore

The Indian Space Research Organisation (ISRO) set up a regional academic center for space at the National Institute of Technology (NITK) at Surathkal in Karnataka’s southwest Dakshina Kannada district. The center at NIT-K will conduct joint research and development in space technology applications to meet the needs of our space programs. ISRO will provide ₹ two crore grants annually to NIT for the R&D projects and promotional activities throughout the year. The space agency and the engineering institute.

The agreement envisages the utilization of IIA’s expertise in astrophysics and astronomy for developing advanced technologies for inter-planetary space explorations. Both the academic and research institutions will also collaborate in setting up optical telescope facilities under the Netra project for space object tracking, studying space weather, asteroids, and near-earth objects.

The UN has declared Pakistani education activist and Nobel laureate Malala Yousafzai as “the most famous teenager in the world” in its ‘Decade in Review’ report.

In 2014, Malala became the youngest recipient of the Nobel Peace Prize in recognition of her efforts for children’s rights which started even before she was shot in the head two years ago by Taliban militants.

She became a UN Messenger of Peace in 2017, with a special focus on girls.

NASA astronaut Christina Koch set a new record for the longest single spaceflight by a woman, eclipsing the record of 288 days set by former NASA astronaut Peggy Whitson in 2016-17. Koch has six weeks to go before returning to Earth from the International Space Station (ISS). The Expedition 61 Flight Engineer has spent more than 300 days in space.

Koch earlier made history in her stay aboard the orbital laboratory. The opportunity to be up here for so long is truly an honor. Koch arrived at the space station on March 14, expected to be on a typical six-month mission.NASA extended her stay partly in a bid to collect more data about the effects of long-duration spaceflight.

Prime Minister Narendra Modi has said that ISRO is planning to launch a satellite called Aditya to study the sun.

The aim of the mission is to keep a permanent eye on the sun without any disturbance.

Aditya-L1 is meant to observe the solar corona.

In his ‘Mann ki Baat’ programme of AIR, Mr Modi said, India is quite advanced in the field of astronomy and ISRO has taken path-breaking initiatives in this field.

Former India captain member of the 1983 World Cup-winning team Krish Srikkanth will be the recipient of this year’s prestigious CK Nayudu Lifetime Award given by the BCCI. Anjum Chopra is the co-recipient of the lifetime achievement award for the year 2019.

The BCCI Annual Award function held in Mumbai. Srikkanth and Anjum conferred with the Lifetime Achievement award for their contributions to Indian cricket.  Srikkanth is one of the biggest names to have come out of Tamil Nadu cricket stable apart from another former India skipper, S Venkataraghavan and Ravichandran Ashwin. He represented India between 1981 to 1992.

FIDE (Federation of International Chess Federation) is the supreme body by the International Olympic Committee (IOC) in conducting chess tournaments at continental levels and global level. FIDE founded in Paris, France, on July 20, 1924.
The motto of the organization is Gens una sumus meaning. We are one people. 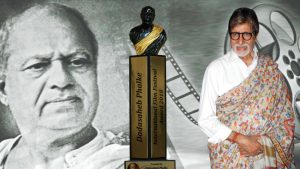 Amitabh Bachchan won four National Film Awards for Best Actor through his illustrious career, last winning it for his performance in the 2015 film Piku.  The award named after Dhundiraj Govind Phalke is the father of Indian cinema instituted in 1969. Amitabh Bachhan made his debut in Hindi film industry in the same year with Saat Hindustani . The highest honour for an artist in Indian cinema comprises a Swarna Kamal medallion, a shawl, and a cash prize of 10 lakh rupees. It was conferred upon late actor Vinod Khanna in 2017.