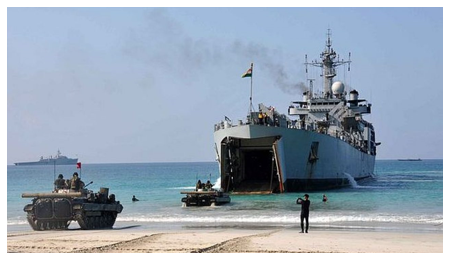 The Ladakh stand-off with China has catalysed India’s efforts to strengthen its military presence at the Andaman and Nicobar Islands.

India recently moved to expedite plans for basing additional military forces, including facilities for additional warships, aircraft, missile batteries and infantry soldiers at the strategically-located Andaman Islands. Naval air stations INS Kohassa in Shibpur and INS Baaz in Campbell Bay are reportedly having their runways extended to support operations by large aircraft, even as a 10-year infrastructure development “roll-on” plan — pegged at Rs 5,000 crores — is on the fast-track. Indian strategic commentators are even urging New Delhi to permit friendly foreign navies access to the ANI’s military bases.

The idea of militarising the Andaman Islands isn’t new. Since the 1980s, Indian commentators have advocated building strategic muscle at the ANI. What has often seemed like a straightforward choice for Indian policymakers, however, has never been an easy decision to make. On the matter of the strategic development of the Andamans, India’s defence and foreign policy establishments have not always been on the same page. A section of India’s diplomatic community has opposed militarising the ANI, arguing that turning the islands into a strategic-military garrison would militarise the littorals — an outcome that would not sit well with countries in South and Southeast Asia.

The proponents of the Andaman’s militarisation point to a different kind of asymmetry: The apparent lack of reciprocity in India’s bilateral logistics agreements. The Indian navy’s plans to offer logistical support to partner navies does not, ostensibly, include its ANI facilities. Four years after signing a logistics pact with the United States (US), its navy ships still have no access the ANI. France, Singapore and Australia — India’s other logistics partners — too haven’t had their warships repaired or replenished at Indian island facilities. With New Delhi unwilling to open up its island bases to foreign warships, observers say India’s logistics arrangements haven’t performed to potential. To counter China’s expanding footprint in India’s sphere of maritime interest, militarisation advocates aver New Delhi must permit Japan, Australia and France and the US to build strategic capabilities at the ANI.