The National Food Security Act, 2013 (also Right to Food Act) is an Act of the Parliament of India which aims to provide subsidized food grains to approximately two thirds of India’s 1.2 billion people.WHO Defines Food security to exists when all people, at all times, have physical, social and economic access to sufficient, safe and nutritious food which meets their dietary needs and food preferences for an active and healthy life.

Food security has three interlinked contents such as :-

Availability of food,
Access to food and
absorption of food.
Food security is a multidimensional concept covering even the micro level household food security,energy intakes and indicators of malnutrition.

Major components of food security are:-

Foodgrains under TPDS under the Act will be made available at subsidized prices of Rs. 3/- and Rs. 2/- per Kg for rice and wheat respectively under priority category. 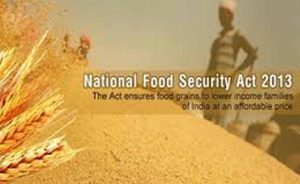 Under NFSA, state governments are required to identify households to be covered under AAY and priority categories within a year from the commencement of NFSA and place the list of identified eligible households in the public domain

Under NFSA, computerization of TPDS operations has been taken up with the aim to improve the efficiency of the current system and to address various challenges such as leakages and diversion of foodgrains, fake and bogus ration cards, lack of transparency and weak grievance redressal mechanisms.