Computers differ based on their data processing abilities. They are classified according to purpose, data handling and functionality.

According to functionality, computers are classified as: 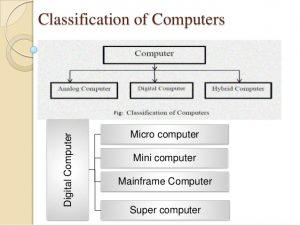 1st  generation computers.This is a generation of computers that were discovered between the years 1946 and 1957.These computers had the following characteristics: They used vacuum tubes for circuiting.They used magnetic drums as memory for data processing.Their operating system was quite low as compared to the later generations.An operating system can be defined as a collection of programs designed to control the computer’s interaction and communication with the user. A computer must load the operating system like Microsoft into memory before it can load an application program like Ms Word.These computers required large space for installation.They were large in size and could take up the entire room.They consumed a lot of power.They also produced huge amounts of energy and power which saw machines breaking down oftenly. Using the computers,programming capabilities was quite low since the computers relied on machine language.Machine language can only be understood by the computer but not human beings .Their input was based on punched cards and paper tapes.

3rd generation computers.These are computers that existed between 1965 and 1971.The computers used integrated circuits(ICs) for circuitry purposes.The computers were smaller in size due to the introduction of the chip.They had a large memory for processing data. Their processing speed was much higher.The technology used in these computers was small scale integration (SSI) technology.

4th generation computers. The computers under this generation were discovered from 1972 to 1990s. The computers employed large scale integration (LSI) technology.The size of memory was /is high/large,hence faster processing of data.Their processing speed was high.The computers were also smaller in size and less costly in terms of installation.This phase of computers saw introduction of keyboards that could interface well with processing system.During this phase, there was rapid internet evolution.Other advances that were made included the introduction of GUI(graphical user interface) and mouses.Other than GUI, there exist other user interfaces like natural-language interface,question-and-answer interface,command line interface(CLI).

5th generation computers.These are computers that are still under development and invention. There development might have began in 1990s and continues in to the future. These computers use very large scale integration (VLSI) technology. The memory speed of these computers is extremely high.The computers can perform parallel processing. It is during this generation that Artificial Intelligence (AI) concept was generated e.g voice and speech recognition. These computers will use quantum computation and molecular technology.They will be able to interpret data and respond to it without direct control by human beings.

Applications and Limitations of Digital Computers

In a very general way, it can be said that the advantages of the digital computer compared to the analog computer,I are its greater flexibility and precision, while its disadvantages are its higher cost and complexity.

Information storage can be easier in digital computer systems than in analogue ones. New features can often be added to a digital system more easily too.

Computer-controlled digital systems can be controlled by software, allowing new functions to be added without changing hardware. Often this can be done outside of the factory by updating the product’s software. So, the product’s design errors can be corrected after the product is in a customer’s hands.

Digital computers play an important role in life today as they can be used to control industrial processes, analyse and organize business data, assist in scientific research and designing of automobiles and aircraf, and even help making special effects in movies. Some Main Applications of Digital Computers are as follows –

Official statistics keepers and some scouts use computers to record statistics, take notes and chat online while attending and working at a sports event.

The best athletes pay close attention to detail. Computers can slow recorded video and allow people to study their specific movements to try to improve their tendencies and repair poor habits.

Many sportswriters attend several sporting events a week, and they take their computers with them to write during the game or shortly after while their thoughts are fresh in their mind.

The main disadvantages are that digital circuits use more energy than analogue circuits to accomplish the same tasks, thus producing more heat as well. Digital circuits are often fragile, in that if a single piece of digital data is lost or misinterpreted, the meaning of large blocks of related data can completely change.