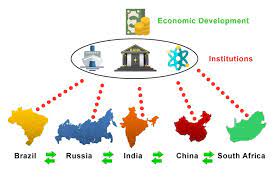 India has been a rather late entrant in regional trading as many of the major agreements were concluded in as late as 2007. India has a number of operational agreements bi-lateral (Sri Lanka, Afghanistan, S. Korea, Bhutan, Nepal, etc.), tri-lateral (India, Brazil and South Africa (SA), and pluri-lateral agreements (ASEAN), ranging from PTAs to FTAs to even broader areas of economic cooperation (Singapore, Thailand, Japan, S. Korea, etc.) and even framework agreements (Bay of Bengal Initiatives for Multi Sectoral Technical and Economic Cooperation (BIMSTEC).

The other is the IBSA which has the potential to provide newer markets in African and Latin American countries. India in the last few years has been fairly aggressive in concluding agreements conscious of the fact that it has been a late entrant and not to miss the bus.

It has taken a different line of trading of moving away from conventional global ‘vertical trading’ into a ‘horizontal’ or deeper levels of regional trading. Global trading is around goods and tariffs while India as part of horizontal trading has gone beyond goods of trade in services and also areas of economic cooperation through comprehensive economic agreements (CECA) and comprehensive economic partnership agreements (CEPA). CECA is an agreement of trade in goods, the same like a FTA but an additional agreement of willing to negotiate or open to trade in services and also explore areas of mutual economic cooperation. Once these areas are negotiated, finalized and signed it becomes CEPA.

India has CECA in different stages with Singapore, France, Australia, Japan and CEPA with S. Korea, Sri Lanka, Hong Kong. It is in the process of finalizing a broad based trade and investment agreement (BTLA) with the European Union which will open up entire Europe for trading. Regional trading is seen as a way to accelerate exports and at the same time establishing better relations with member countries. It will give an opportunity to explore newer markets, new trading partners, diversified trade, greater economic cooperation and a definite signal of its intention of making trade an engine of growth in future.