Karnataka Ratna is the highest civilian honour of the State of Karnataka. It is awarded to a person for his extraordinary contribution in any field. It was constituted in the year 1992 by the Government of Karnataka. There have been a total of 9 recipients of this award.

The Award comes with a gold medal weighing 50 gm, a citation, a memento and a shawl.

The Rajyotsava Prashasti or Rajyotsava Awards, the second highest civilian honor of the Karnataka state of India are conferred annually by the Karnataka Government on the occasion of the establishment of the state on 1 November celebrated as the Kannada Rajyotsava.

The awards are presented in Bengaluru by the Chief Minister of Karnataka on 1 November of every year. Each award carries an amount of ₹100,000, a 20-gram gold medal and a citation. In addition to that, the government has in the past, allotted commercial land for eligible awardees.

Karnataka Rajyotsava Award was instituted in 1966 to be awarded to citizens of Karnataka in recognition of their distinguished contribution in various spheres of activity including the Arts, Education, Industry, Literature, Science, Sports, Medicine, Social Service and Public Affairs. It has also been awarded to some distinguished individuals who were not citizens of Karnataka but did contribute in various ways to Karnataka.

Basava Puraskara is an award conferred by the Government of Karnataka. The award is presented on the basis of an individuals contribution for social reforms and social change and work for bringing about religious harmony. 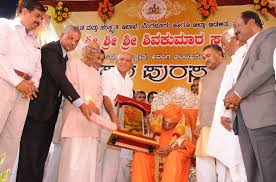 The Basava Puraskara is a national award. The award comprises Rs. 1 million, a memento and a citation.

The Jakanachari Award is a state award of Karnataka conferred on talented sculptors and craftsmen from the state. These awards are given away every year by the government of Karnataka to celebrate the contributions of the legendary sculptor Amarashilpi Jakanachari.

The Kanaka Shree is an award instituted by the Government of Karnataka to recognize and honour individuals who contribute to the promotion of the values and literature of Kanakadasa.

Varnashilpi Venkatappa Award is an award conferred annually by the Government of Karnataka for excellence in painting.