Madhubani, practiced in the Mithilia region of India, is a famous form of folk art. It is done with the help of natural pigments and dyes. The equipment for painting is also usually hand crafted. Geometrical figures and vibrant use of colour are the most strking features of Madhubani paintings. The paintings were initially made on the freshly plastered mud walls but now have been using different mediums like cloth, 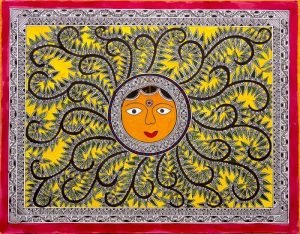 handmade paper and canvas. The most common subject of Madhubani paintings concerns itself with the depiction of Ardhnarishwar (the creator); the practitioners of Hinduism believe that the world was formed because of the union the female and male powers of Parvati and Shiva. This is the reason that artists working in Madhubani art do not draw a single line but always draw double lines symbolizing the harmony between the opposites. Other themes include the depiction of birth, marriage, festivities, natural phenomenon (sun rise, rain, sun-set) and pujas. Some of the award winning and well known practitioners of Madhubani art are Mahasundari Devi, Sita Devi, Godavari Dutt, Bharti Dayal and Bua Devi.

Warli painting is an art form that was first conceived by the Warli tribe, residing in mountainous as well as coastal regions of Gujarat and Maharashtra border and surrounding areas. The paintings are traditionally done in white over brown background. The white pigment is rice mixed with water and gum and the ochre shade is achieved because of the cow-dung plastered mud walls. Yashodhara Dalmia in her book, The Painted World of the Warlis, accounts the history and development of Warli paintings which according to her originated in 2500 and 3000 BCE. Their subject commonly depicts narratives from tribal life and presents common village rituals, allude to religious practices and deify gods and goddesses. However, the figures are extremely rudimentary and the composition is achieved with the help of variations in the basic shapes: circle, triangle and square. Despite the fact that the paintings usually adorn the inner walls of mud houses, yet their study shall convey interesting narratives about the hardships of rural life, religious beliefs and tribal ideologies. The tragedy of the loss of the commons also often finds its way into the narratives of the paintings.

Tanjore Art evolved from the Thanjavur district of south Indian state of Tamil Nadu. The paintings usually concern themselves wit 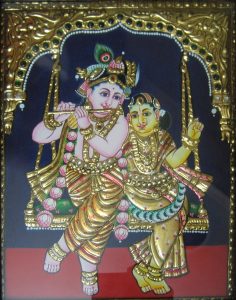 h the depiction of religious subjects, deities and their depiction in a courtly setting. The paintings are done on wooden planks and are embedded and adorned with gold plates, precious and semi-precious stones, along with the pigments for colouring. The composition usually contains two dimensional figures. The act of painting, abiding to the Indian artistic tradition was considered sacred and accompanied by certain rituals; consequently, the paintings remained sacred and were never signed by the composers. These painting were first composed under the patronage of Hindu rulers of Vijayanagar Rayas and Thanjavur Nayaks in Tamil Nadu in the sixteenth century and thus. the subjects remain traditional. However, the charismatic depiction of the subjects and the detailed adornment of ornaments, clothings and architecture make the paintings peculiar. The paintings by C. Kondiah Raju and his student followers continue to produce the modern versions of the art form.

Gond art is a tribal art form from the Central India, believed to have been conceived by the communities that resided in the area of Gondwana, which is now known to be located in eastern Madhya Pradesh. Like Warli paintings, Gond art also originated by attempts of the tribal communities to decorate the walls and floor which later transposed onto paper and canvasses. The traditional Gond images were introduced to the world by the late painter J. Swaminathan, who recognized the talents of seventeen-year-old Jangarh Singh Shyam decorating the huts of Patangarh in Madhya Pradesh. Jangarh Singh Shyam’s paintings were internationally acclaimed after his exhibitions in Tokyo and Paris. The pigments are organically extracted and the paintings are easily recognizable because of the recurrent use of dashes, dots and vibrant colours to compose images. The characteristic motifs of Gond art are surreal images that have origin in mythology of the tribe and the experiences of their interactions with the world. These paintings have succeeded in recording the histories of a people who have often relied in oral sources for handing down of narratives.

These tribal art forms continue to be practiced in different parts of the country and the world and have inspired various modern art forms because of their own peculiarities and brilliance. They have been experimented with and adapted to the modern world, because of the presence of a different cultural scenario where one has witnessed various technological advancements. Natural dyes and hand-made equipment and paper are rarities, yet the cultural resonances continue to survive. There are greater challenges posed to these cultural forms by the more hegemonic cultures, and seizure of land from the communities who have been practicing these art forms, leading to their displacement and breaking of cohesiveness amongst their people.

Pattachitra style of painting is one of the oldest and most popular art forms of Odisha. The name Pattachitra has evolved from the Sanskrit words patta, meaning canvas, and chitra, meaning picture. Pattachitra is thus a painting done on canvas, and is manifested by rich colourful application, creative motifs and designs, and portrayal of simple themes, mostly mythological in depiction.  Some of the popular themes represented through this art form are Thia Badhia – depiction of the temple of Jagannath; Krishna Lila – enactment of Jagannath as Lord Krishna displaying his powers as a child; Dasabatara Patti – the ten incarnations of Lord Vishnu; Panchamukhi – depiction of Lord Ganesh as a five-headed deity. More than anything, the themes are clearly the essence of the art form, conceptualising the meaning of the paintings. It is no surprise therefore that the process of preparing the paintings engages undeterred concentration and careful craftsmanship, stretching the preparation time of the patta alone to around five days.

Making the patta is the first thing that comes in the agenda, and the painters, also called chitrakars, go about their work in preparing a tamarind paste, which is made by soaking tamarind seeds in water for three days. The seeds are later pounded with a crusher, mixed with water, and heated in an earthen pot to turn it to a paste, which is called niryas kalpa. The paste is then used to hold two pieces of cloth together with it, and coated with a powder of soft clay stone a couple of times till it becomes firm. Soon as the cloth becomes dry, the final touch of polishing it with a rough stone and then a smooth stone or wood is given, until the surface becomes smooth and leathery, and is all ready as a canvas to be painted on.