Karnataka’s farmers have been facing several issues ranging from improper technology to agricultural loan debts. Karnataka is a vast state with varied topography, while there are agriculturally prosperous regions, some regions are severely affected by the frequent droughts. The Karnataka government even after introducing and implementing certain policies for the farmers, have failed to protect the farmers, this has led to more than 3500 farmers committing suicide in the period of years from 2013 to 2020. 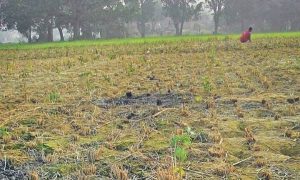 Farmer’s suicide has become a pertinent issue in the state, in 2017 Karnataka faced the worst droughts in last 40-odd years. Droughts have affected several districts of the state for the fourth year running, the Northern region ranks on the top in terms of drought-prone region, as the region lacks proper irrigation system and rely on traditional methods of farming. Out of the  farmers’ death in between 2013 to 2020, more then 2500 of the farmer suicides happened due to the drought or due to the failure of crop. The growing agrarian crisis in the state has resulted in the stagnation of the agricultural sector that is one of the major contributors towards the share in Karnataka’s GDP.

In spite of the large scale mechanisation of agriculture in Karnataka, most of the agricultural operations in larger parts are carried on by human hand using simple and conventional tools and implements like wooden plough, sickle, etc.

Little or no use of machines is made in ploughing, sowing, irrigating, thinning and pruning, weeding, harvesting threshing and transporting the crops. This is specially the case with small and marginal farmers. It results in huge wastage of human labour and in low yields per capita labour force.

Agricultural marketing still continues to be in a bad shape in rural Karnataka. In the absence of sound marketing facilities, the farmers have to depend upon local traders and middlemen for the disposal of their farm produce which is sold at throw-away price.

In most cases, these farmers are forced, under socio-economic conditions, to carry on distress sale of their produce. In most of small villages, the farmers sell their produce to the money lender from whom they usually borrow money.

In the absence of an organised marketing structure, private traders and middlemen dominate the marketing and trading of agricultural produce. The remuneration of the services provided by the middlemen increases the load on the consumer, although the producer does not derive similar benefit.

Storage facilities in the rural areas are either totally absent or grossly inadequate. Under such conditions the farmers are compelled to sell their produce immediately after the harvest at the prevailing market prices which are bound to be low. Such distress sale deprives the farmers of their legitimate income.

Agriculture is an important industry and like all other industries it also requires capital. The role of capital input is becoming more and more important with the advancement of farm technology. Since the agriculturists’ capital is locked up in his lands and stocks, he is obliged to borrow money for stimulating the tempo of agricultural production. The main suppliers of money to the farmer are the money-lenders, traders and commission agents who charge high rate of interest and purchase the agricultural produce at very low price.

Sub-division and fragmentation of the holdings is one of the main causes of low agricultural productivity and backward state of agriculture. A lot of time and labour is wasted in moving seeds, manure, implements and cattle from one piece of land to another.

Irrigation becomes difficult on such small and fragmented fields. Further, a lot of fertile agricultural land is wasted in providing boundaries. Under such circumstances, the farmer cannot concentrate on improvement.

One of the main handicaps with Indian agriculture is the lack of cheap and efficient means of transportation, and Karnataka is not the exception.

Even at present there are lakhs of villages which are not well connected with main roads or with market centres.

Most roads in the rural areas are bullock- cart roads and become useless in the rainy season. Under these circumstances the farmers cannot carry their produce to the main market and are forced to sell it in the local market at low price. Linking each village by metalled road is a gigantic task and it needs huge sums of money to complete this task.