Gandhian approach to rural development may be labelled as ‘idealist’. It attaches supreme importance to moral values and gives primacy to moral values over material conditions. The Gandhians believe that the source of moral values in general lies in religion and Hindu scriptures like the Upanishads and the Gita, in particular.

The concept of ‘Rama Rajya’ is the basis of Gandhiji’s idea of an ideal social order. Gandhi defined Rama Rajya as “sovereignty of the people based on moral authority”. He did not view Rama as a king, and people as his subjects. In the Gandhian scheme, ‘Rama’ stood for God or one’s own ‘inner voice’ Gandhi believed in a democratic social order in which people are supreme. Their supremacy is, however, not absolute. It is subject to moral values.

Villages are centre of Gandhi’s approach  of Development

The village is the basic unit of the Gandhian ideal social order. Gandhi succinctly pointed out, “If the village perishes India will perish too. We have to make a choice between India of the villages that is as ancient as herself and India of the cities which are a creation of foreign domination”. Gandhi’s ideal village belongs to the Pre-British period, when Indian villages were supposed to constitute the federation of self-governing autonomous republics. 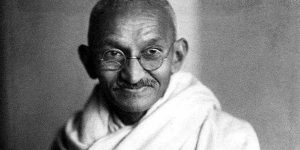 The central authority will have no power to enforce its decisions on village republics except the moral pressure or power of persuasion. The economic system and transport system introduced by the British have destroyed the “republican’ character of the villages.

Gandhi firmly believes that village republics can be built only through decentralisation of social and political power. In such a system decision-making power will be vested in the Village Panchayat rather than in the State and the national capital. The representatives would be elected by all adults for a fixed period of five years. The elected representatives would constitute a council, called the Panchayat.

The Panchayat exercises legislative, executive and judicial functions. It would look after education, health and sanitation of the village. It would be the Panchayats responsibility to protect and uplift ‘untouchables’ and other poor people. Resources for Gandhian Approach to managing village affairs would be raised from the villages.

The village should be self-sufficient as far as its basic needs like food, clothing, and other necessities are concerned. The village has to import certain things which it cannot produce in the village. Gandhi said “We shall have to produce more of what we can, in order thereby to obtain in exchange, what we are unable to produce.”

The village should produce food-crops and cotton in order to meet its requirements. Some lands should also be earmarked for cattle and for a playground for adults and children. If some land is still available, it should be used for growing useful cash crops like tobacco, opium, etc. to enable the village to get in exchange things which it does not produce.

Gandhiji was not against the institution of private property. But he wanted to restrict the right of private property to what was necessary to yield an honourable livelihood. For the excess he prescribed the principle of trusteeship.  Gandhiji emphasized the principle of trusteeship in social and economic affairs. He firmly believed that all social property should be held in trust. The capitalists would take care not only of themselves but also of others. Some of their surplus wealth would be used for the rest of the society.

The poor workers, under trusteeship, would consider the capitalists as their benefactors; and would repose faith in their noble intentions. Gandhiji felt that if such a trusteeship were established, the welfare of the workers would increase and the clash between the workers and employers would be avoided. Trusteeship would help considerably “in realising a state of equality on earth.”

Gandhiji firmly believed that land should not be owned by any individual. Land belongs to God. Hence, individual ownership of land should be shunned. For that a landowner should be persuaded to become a trustee of his land. He should be convinced that the land he owns does not belong to him. Land belongs to the community and must be used for the welfare of the community. They are merely trustees. By persuasion the heart of landowners should be changed and they should be induced to donate their land voluntarily.

Gandhian approach to rural development strives to reconstruct village republics which would be non-violent, self- governed and self-sufficient so far as the basic necessities of ruralites are concerned. Apart from creating a new socio-economic order, it Endeavour’s to transform man; otherwise the changes in the socio-economic order will be short-lived.