Market in Karnataka for the consumer products is made up of two distinct parts, one is urban and other is rural market. The vastness of the rural market poses both a challenge and an opportunity to the marketers. The desire to improve the living standards is felt as keenly in the rural areas as in the urban areas. Rural incomes are rising and the poverty ratio is falling.

The rural consumer in majority of the cases is illiterate, a low income consumer, more price sensitive, more of social interaction within his group, psychologically emotional, guided by opinion leaders, having lower aspirational levels, and having imitational characteristics. This fact matrix leads a greater challenge to deal with the rural consumer.

Rural market in Karnataka is large and scattered into a number of regions. It consists of  crores rural consumers who live in lakhs of villages. It is scattered and widespread over unlike the urban market confined to a handful of metros, cosmopolitan cities and towns. Covering, such a large and widely scattered geographical market, characterized by less population per settlement, raises the inventory and transportation cost and thus affects the viability of the route schedule operations of the distribution system in rural areas.

Major Income of Rural Consumers is from Agriculture

Rural prosperity is tied with agriculture prosperity. Major part of income of rural people comes from agriculture. In the event of crop failure, the income of rural masses is directly affected. However, the recent past has seen a gradual reduction in the sole dependence on agriculture, as other sectors have started playing significant role in the rural economy. 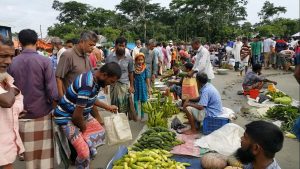 Rural population is employed in small-scale agricultural and related occupations. This unreliability factor in case of rural income makes the rural consumers extremely conscious in their purchase behaviour as they are not confident about their future earnings. Majority of the rural population lives below poverty line and have low literacy rate, low per capita income, social backwardness etc.

The variations in behavior due to consumer environment geographical, occupation, demographical and behavioral, influences the lifestyle and create altogether different sets of needs in different areas. This creates the need to segment the rural market to cater it effectively and profitability.

Villages develop slowly and have a traditional outlook. Change is continuous process but most rural people accept changes gradually. They mostly resist to change. This is gradually changing due to literacy especially in the youth who have begun to change the outlook in the villages.