Mountain, landform that rises prominently above its surroundings, generally exhibiting steep slopes, a relatively confined summit area, and considerable local relief. Mountains generally are understood to be larger than hills, but the term has no standardized geological meaning. Very rarely do mountains occur individually. In most cases, they are found in elongated ranges or chains. When an array of such ranges is linked together, it constitutes a mountain belt. 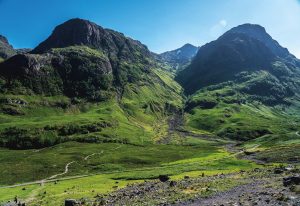 Chains of active volcanoes, such as those occurring at island arcs, are commonly marked by individual high mountains separated by large expanses of low and gentle topography. In some chains, namely those associated with “hot spots” only the volcanoes at one end of the chain are active. Thus, those volcanoes stand high, but with increasing distance away from them erosion has reduced the sizes of volcanic structures to an increasing degree.

The folding of layers of sedimentary rocks with thicknesses of hundreds of metres to a few kilometres often leaves long parallel ridges and valleys termed fold belts, as, for example, in the Valley and Ridge province of Pennsylvania in the eastern United States.

The more resistant rocks form ridges, and the valleys are underlain by weaker ones. These fold belts commonly include segments where layers of older rocks have been thrust or pushed up and over younger rocks. Such segments are known as fold and thrust belts. Typically their topography is not as regular as where folding is the most important process, but it is usually dominated by parallel ridges of resistant rock divided by valleys of weaker rock, as in the eastern flank of the Canadian Rocky Mountains or in the Jura Mountains of France and Switzerland.

Most fold and thrust belts are bounded on one side, or lie parallel to, a belt or terrain of crystalline rocks. These are metamorphic and igneous rocks that in most cases solidified at depths of several kilometres or more and that are more resistant to erosion than the sedimentary rocks deposited on top of them. These crystalline terrains typically contain the highest peaks in any mountain belt and include the highest belt in the world, the Himalayas, which was formed by the thrusting of crystalline rocks up onto the surface of the Earth. The great heights exist because of the resistance of the rocks to erosion and because the rates of continuing uplift are the highest in these areas. The topography rarely is as regularly oriented as in fold and thrust belts.

Dome mountains are created when a large amount of magma pushes up from below the Earth’s crust, but it never actually reaches the surface and erupts. And then, before it can erupt, the source of the magma goes away and the pushed up rock cools and hardens into a dome shape. Since the dome is higher than its surroundings, erosion works from the top creating a circular mountain range.

Volcanic mountains are created when magma from beneath the Earth makes its way to the surface. When does get the surface, the magma erupts as lava, ash, rock and volcanic gases. This material builds up around the volcanic vent, building up a mountain. Some of the largest mountains in the world were created this way, including Mauna Loa and Mauna Kea on the Big Island of Hawaii. Other familiar volcanoes are Mt. Fuji in Japan and Mt. Rainier in the US.

Mountain lands provide a scattered but diverse array of habitats in which a large range of plants and animals can be found. At higher altitudes harsh environmental conditions generally prevail, and a treeless alpine vegetation, upon which the present account is focused, is supported. Lower slopes commonly are covered by montane forests. At even lower levels mountain lands grade into other types of landform and vegetation—e.g., tropical or temperate forest, savanna, scrubland, desert, or tundra.

Mountain environments have different climates from the surrounding lowlands, and hence the vegetation differs as well. The differences in climate result from two principal causes: altitude and relief.

Altitude affects climate because atmospheric temperature drops with increasing altitude by about 0.5 to 0.6 °C (0.9 to 1.1 °F) per 100 metres (328 feet). The relief of mountains affects climate because they stand in the path of wind systems and force air to rise over them. As the air rises it cools, leading to higher precipitation on windward mountain slopes; as it descends leeward slopes it becomes warmer and relative humidity falls, reducing the likelihood of precipitation and creating areas of drier climate.