Consequences of ethics in human actions

Ethics focuses on human actions and their morality. It is concerned with the morality of human behavior. But first it is important to separate human actions from their morality. The major focus of ethics is on human actions; this also happens to be the starting point for most legal systems. They are primarily interested in human actions and, following that, in their legality or illegality. Ethics, then, does not concern itself with the actions of animals. Furthermore, ethics focuses only on people’s deliberate human actions, and not on undeliberate actions or actions done because of ignorance. The distinction here is between what philosophers call an actus humanus (deliberate human action) and an actus hominis (undeliberate action). What is it that makes an action human? What are the principal ingredients of a human action? Lawyers also focus on this issue. Deontologists use criteria to arrive at the notion of a human action while teleologists reflect on the merits of a particular action. Both may arrive at the same conclusion, but they also may not. 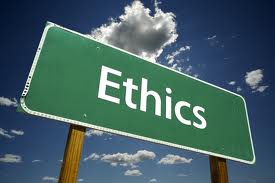 Scholastic philosophers maintain that three requirements must be concurrently present for any action to be human:

Passions influence human action. Psychology studies human passions in detail. Passions are powerful emotions or appetites springing from a pretense of something perceived as good or evil; they are usually accompanied by bodily changes. Passions include human appetites, such as anger, grief, love, hatred or greed. Thus a grieving person often sheds tear and makes grieving sounds.

Fear Fear may influence human action to the extent of rendering it nonhuman, somewhat human or totally human. Fear is mental trepidation or an emotional reaction arising from an impending danger. There are two kinds of fear:

Violence can influence the degree to which actions are human or not. Violence is external physical force exerted on a person. When a person offers all the resistance he can, actions done in these circumstances are unfree and therefore not human actions. If he does not offer as much resistance as possible, the actions performed may be less free and so human in proportion to the resistance not exerted.

Habit Habit can influence the nature of human action. Habit is a quality acquired through frequent repetition that enables the subject to act easily and promptly. It is an inclination that is also difficult to remove. Good habits are virtues and bad habits are vices. The issue here is the influence of habits on voluntariness.

Utilitarians claim that the test of goodness or badness of a human action is the usefulness of the action. This is largely a teleological theory. An action is morally good if it is useful and morally evil if it is not.

There are two kinds of utilitarians, who differ only on the notion of usefulness. Individual utilitarianism, or hedonism, originated with Epicurus. It also was popular in France during the nineteenth century. It holds that an action is intrinsically good if it is useful for or brings pleasure to the individual. An action is morally evil if it destroys or diminishes a person’s pleasure. Actions that initially bring pleasure but subsequently bring pain or punishment are good or evil according to their most pronounced effect. For example, a person drinking alcohol may derive certain pleasure, but a subsequent hangover may bring pain or driving-while intoxicated arrest may result in punishment. The most pronounced effect determines the morality of the action of drinking alcohol.

Social utilitarianism, or altruism, holds that an action is morally good if it is useful for the community: the greatest good for the greatest number. Actions are good or evil in as far as they advance or hinder the happiness or good of the community.

The main criticism of utilitarianism in general is that it often promotes selfishness. It also assumes without proof that people can satisfy their needs for the perpetual good in their lives. Individual utilitarianism provides no advance guarantee that an action will bring pleasure or pain; often a person must act before experiencing pleasure or pain. If pleasure is the sole criterion of moral goodness, every act, including stealing, murder, and so on, can be moral. The same argument applies to social utilitarianism— that is, every act done for the good of the community is moral. Social utilitarianism also destroys the dignity of the individual and makes people cogs in the wheel of human progress.

Deontological approach of normative ethics is the opposite of the teleological approach since the former denies that an action is right or wrong because of its consequences. Deontological ethics judges the moral quality of an action based on the action’s adherence to a rule or rules. The term ‘Deontology’ literally means a duty based morality as it is concerned with what people do, not with the consequences of their actions. According to this theory, do the right things because they are right things to do. Similarly, do not do the wrong things; avoid them because they are wrong. To sum up, according to deontological ethics, some acts are right or wrong because of the sorts of things they are and people have a duty to act accordingly, regardless of the good or bad consequences that they may produce.

Virtue ethics is more concerned with the inherent character of a person who are acting rather than on specific actions. This theory assumes that once a virtuous disposition is achieved one will know what to do for the best. As such this approach is contrasted to the teleological approach which derives rightness or wrongness of an action from the consequences it produces. Virtue ethics is also opposed to deontology which emphasizes duty to rules. To sum up, virtue ethics emphasizes the role of character rather than either doing one’s duty or acting in order to bring about good consequences or results.