fungi, any of about 99,000 known species of organisms of the kingdom Fungi, which includes the yeasts, rusts, smuts, mildews, molds, and mushrooms. There are also many funguslike organisms, including slime molds and oomycetes (water molds), that do not belong to kingdom Fungi but are often called fungi. Many of these funguslike organisms are included in the kingdom Chromista. Fungi are among the most widely distributed organisms on Earth and are of great environmental and medical importance. Many fungi are free-living in soil or water; others form parasitic or symbiotic relationships with plants or animals.

Fungi are eukaryotic organisms; i.e., their cells contain membrane-bound organelles and clearly defined nuclei. Historically, fungi were included in the plant kingdom; however, because fungi lack chlorophyll and are distinguished by unique structural and physiological features (i.e., components of the cell wall and cell membrane), they have been separated from plants. In addition, fungi are clearly distinguished from all other living organisms, including animals, by their principal modes of vegetative growth and nutrient intake. Fungi grow from the tips of filaments (hyphae) that make up the bodies of the organisms (mycelia), and they digest organic matter externally before absorbing it into their mycelia. 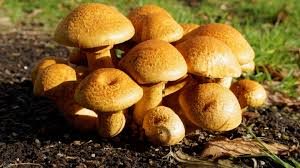 While mushrooms and toadstools (poisonous mushrooms) are by no means the most numerous or economically significant fungi, they are the most easily recognized. The Latin word for mushroom, fungus (plural fungi), has come to stand for the whole group. Similarly, the study of fungi is known as mycology—a broad application of the Greek word for mushroom, mykēs. Fungi other than mushrooms are sometimes collectively called molds, although this term is better restricted to fungi of the sort represented by bread mold. (For information about slime molds, which exhibit features of both the animal and the fungal worlds, see protist.)

The mushrooms, because of their size, are easily seen in fields and forests and consequently were the only fungi known before the invention of the microscope in the 17th century. The microscope made it possible to recognize and identify the great variety of fungal species living on dead or live organic matter. The part of a fungus that is generally visible is the fruiting body, or sporophore. Sporophores vary greatly in size, shape, colour, and longevity. Some are microscopic and completely invisible to the unaided eye; others are no larger than a pin head; still others are gigantic structures. Among the largest sporophores are those of mushrooms, bracket fungi, and puffballs. Some mushrooms reach a diameter of 20 to 25 cm (8 to 10 inches) and a height of 25 to 30 cm (10 to 12 inches). Bracket, or shelf, fungi can reach 40 cm (16 inches) or more in diameter. A specimen of the bracket fungus Fomitiporia ellipsoidea discovered in 2010 on Hainan Island in southern China had a fruiting body measuring 10.8 metres (35.4 feet) in length and 82–88 cm (2.7–2.9 feet) in width. It may have held some 450 million spores and weighed an estimated 400–500 kg (882–1,102 pounds), at the time making it the largest fungal fruiting body ever documented. Puffballs also can grow to impressive sizes. The largest puffballs on record measured 150 cm (5 feet) in diameter. The number of spores within such giants reaches several trillion.

Many pathogenic fungi are parasitic in humans and are known to cause diseases of humans and other animals. In humans, parasitic fungi most commonly enter the body through a wound in the epidermis (skin). Such wounds may be insect punctures or accidentally inflicted scratches, cuts, or bruises. One example of a fungus that causes disease in humans is Claviceps purpurea, the cause of ergotism (also known as St. Anthony’s fire), a disease that was prevalent in northern Europe in the Middle Ages, particularly in regions of high rye-bread consumption. The wind carries the fungal spores of ergot to the flowers of the rye, where the spores germinate, infect and destroy the ovaries of the plant, and replace them with masses of microscopic threads cemented together into a hard fungal structure shaped like a rye kernel but considerably larger and darker. This structure, called an ergot, contains a number of poisonous organic compounds called alkaloids. A mature head of rye may carry several ergots in addition to noninfected kernels. When the grain is harvested, much of the ergot falls to the ground, but some remains on the plants and is mixed with the grain. Although modern grain-cleaning and milling methods have practically eliminated the disease, the contaminated flour may end up in bread and other food products if the ergot is not removed before milling. In addition, the ergot that falls to the ground may be consumed by cattle turned out to graze in rye fields after harvest. Cattle that consume enough ergot may suffer abortion of fetuses or death. In the spring, when the rye is in bloom, the ergot remaining on the ground produces tiny, black, mushroom-shaped bodies that expel large numbers of spores, thus starting a new series of infections.

Other human diseases caused by fungi include athlete’s foot, ringworm, aspergillosis, histoplasmosis, and coccidioidomycosis. The yeast Candida albicans, a normal inhabitant of the human mouth, throat, colon, and reproductive organs, does not cause disease when it is in ecological balance with other microbes of the digestive system. However, disease, age, and hormonal changes can cause C. albicans to grow in a manner that cannot be controlled by the body’s defense systems, resulting in candidiasis (called thrush when affecting the mouth). Candidiasis is characterized by symptoms ranging from irritating inflamed patches on the skin or raised white patches on the tongue to life-threatening invasive infection that damages the lining of the heart or brain. Improved diagnosis and increased international travel, the latter of which has facilitated the spread of tropical pathogenic fungi, have resulted in an increased incidence of fungal disease in humans. In addition, drug therapies used to manage the immune system in transplant and cancer patients weaken the body’s defenses against fungal pathogens. Patients infected with human immunodeficiency virus (HIV), the causative agent of acquired immunodeficiency syndrome (AIDS), have similarly weakened immune defenses against fungi, and many AIDS-related deaths are caused by fungal infections (especially infection with Aspergillus fumigatus).

Fungi, together with bacteria, are responsible for most of the recycling which returns dead material to the soil in a form in which it can be reused. Without fungi, these recycling activities would be seriously reduced. We would effectively be lost under piles many metres thick, of dead plant and animal remains

and plant growth Fungi are vitally important for the good growth of most plants, including crops, through the development of mycorrhizal associations. As plants are at the base of most food chains, if their growth was limited, all animal life, including human, would be seriously reduced through starvation.

Fungi are also important directly as food for humans. Many mushrooms are edible and different species are cultivated for sale worldwide. While this is a very small proportion of the actual food that we eat, fungi are also widely used in the production of many foods and drinks. These include cheeses, beer and wine, bread, some cakes, and some soya bean products.

Penicillin, perhaps the most famous of all antibiotic drugs, is derived from a common fungus called Penicillium. Many other fungi also produce antibiotic substances, which are now widely used to control diseases in human and animal populations. The discovery of antibiotics revolutionized health care worldwide.

Some fungi which parasitise caterpillars have also been traditionally used as medicines. The Chinese have used a particular caterpillar fungus as a tonic for hundreds of years. Certain chemical compounds isolated from the fungus may prove to be useful treatments for certain types of cancer.