External trade was carried on between South India and Hellenistic kingdom of Egypt and Arabia as well as the Malay Archipelago. The author of the Periplus of the Erythrean Sea (75 A.D.) gives the most valuable information about the trade between India and the Roman Empire. He mentions the port of Naura (Cannanore) Tyndis (Tondi), Muzuris (Musiri, Cranganore), and Nelcynda as the leading ones on the west coast.

Connected with the phenomenon of trade was the growth of money economy in the early centu­ries. The imported coins were mostly used as bullions. The large quantities of gold and silver coins struck by all the Roman emperors beginning from the reign of Augustus (and that of Tiberius) down to Nero (54-58 A. D.) found in the interior of Tamil land, testify to the extent of the trade and the presence of Roman settlers in the Tamil country.

The Pandya territory occupied the southern-most and the south-eastern portion of the Indian peninsula, and it roughly included the modern districts of Tinnevelly, Ramnad and Madurai in Tamilnadu. It had its capital at Madurai. The Pandyas are rightly famous for patronising the poets and scholars of the Tamil Sangams.

According to Silappadikaram, Nedunjhelian, in a fit of passion, ordered without judicial enquiry the execution of Kovalan who was accused of theft of the queen’s anklet. When Kovalan’s wife proved her husband’s innocence, the king was struck with remorse and died of shock on the throne.

The Pandyan kings profited from trade with the Roman Empire and sent embassies to the Roman emperor Augustus. The Pandyan port Korkai was a great centres of trade and commerce, another port was Saliyur. The brahmanas enjoyed considerable influence, and the Pandya kings performed Vedic sacrifices in the early centuries of the Christian era. 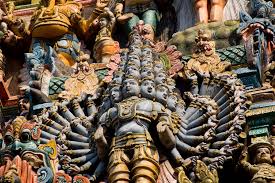 Structural temples were built on stones. They were simple in style. Each temple consists of Garbagraha, arthamandapa and mahamandapa. Such structural stone temples are found in Kovilpatty, Thiruppathur and Madurai. The Pandya kings constructed structural temples at Ambasamuthram, Thiruppathur. Mannarkudi, Madurai, Alagarkoil. Srivilliputhur and in Chinnmanur, Internal structures of these temples were constructed in a planned manner.

Pandyn sculptures are beautiful and ornamental. Some sculptures are engraved on single stone. They have got more messages and values. Pandya period witnessed renaissance in the art of sculpture. Sculptures of Somaskandar, Durgai, Ganapathy, Narasimha, Nataraja are very good specimens. Sculptures at Kalugumalai, Thirupparankundram, Thiurmalaipuram and Narthamalai are very famous. Vishnu sculpture at Kunnakudi and Nataraja sculpture at Thiurkolakkudi are on par excellence with the sculptures of pallava, chola period. Paintings: The beauty of the Pandya mural painting can be seen in the Chittannavasal cave temples constructed during the time of Srimaran and Srivallaba Pandyan. The ceilings and pillars at Chittannavasal bear the paintings of dancing girls, the kings, the queens, plants and animals. The picture of lotus, bathing elephants and playing fishes were good at Chittannavasal. Oil painting was also there. They are outstanding examples of pandiya paintings.

Pandyas are mentioned in Sangam literature (c. 100 – 200 C.E.) as well as by Greek and Roman sources during this period. Various Pandyan kings are mentioned in a number of poems in the Sangam literature. Among them, Nedunjeliyan (“the victor of Talaiyalanganam”), Nedunjeliyan (“the conqueror of the Aryan army”), and Mudukudimi Peruvaludi (“of several sacrifices”) deserve special mention. Besides several short poems found in the Akananuru and the Purananuru collections, there are two major works, Mathuraikkanci and the Netunalvatai (in the collection of Pattupattu), that give a glimpse into the society and commercial activities in the Pandyan kingdom during the Sangam age.

It is difficult to estimate the exact date of these Sangam-age Pandyas. The period covered by the extant literature of the Sangam is unfortunately not easy to determine with any measure of certainty. With the exception of the longer epics Cilappatikaram and Manimekalai, which by common consent belong to the age later than the Sangam age, the poems have reached us in the forms of systematic anthologies. Each individual poem generally has attached to it a colophon on the authorship and subject matter of the poem, the name of the king or chieftain to whom the poem relates, and the occasion that called forth the eulogy.

It is from these colophons and rarely from the texts of the poems themselves, that we gather the names of many kings and chieftains and the poets and poetesses patronized by them. The task of reducing these names to an ordered scheme in which the different generations of contemporaries can be marked off has not been easy. To add to the confusion, some historians have even denounced these colophons as later additions and untrustworthy as historical documents.