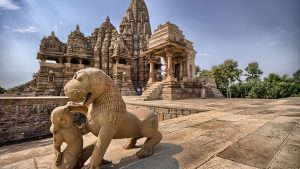 These temples where archaeologically exploded by the British Explorer Alexander Cunningham. Some notable temples of Khajuraho are:-

This Temple dedicated to who is the largest temple of the Khajuraho temple complex. It is attributed to king Ganda. The main spire of or Shikhar rises 31 metres to depict Mount Kailash, the Himalayan mountain abode of Lord Shiva. The Shikhar is surrounded by 84 miniature spires. The Temple contains a marble Shivling in the main sanctum. Beside the Main shikhara, there are 84 smallest subsidiary Towers, all replicas of the main tower. There are almost 900 sculptures on the temple platform.

This is one of the best preserved temples in the complex. It is dedicated to Lord Vishnu. It is built on a high platform which has sculptures of elephants, horses, musician, women and dancers on It. The doorway of the sanctum has a panel of sculptures of incarnations of Lord Vishnu like load Varaha, Vanana and Narsimha. Temple also consists of images of Goddess Durga and Lord Ganesha.

This is the oldest temple in the Khajuraho temple complex. It is made of granite. It is dedicated to Goddess Kali who is represented in the form of 64 Yoginis. The temple is different in design as it has a quadrangular plan with an open Courtyard in between and small shrines on the Periphery. The shrines are tiny plain cells, is entered by a small doorway and roofed by a curvilinear Shikhar of an elementary form. Only 35 of these shrines survive as of today.

This temple is dedicated to Lord Surya( sun god). This temple enshrines an impressive 5 feet high image of Lord Surya in the standing posture driving a Chariot which is pulled by seven horses. That temple also houses a three storied stepped tank locally known as Chopara.

These Jain temples were built by Vimal Shah and designed by Vastupal-Tejpal, Jain laymen, between the 11th and 13th centuries AD and are famous for their use of marble and intricate marble carvings. The five marble temples of Dilwara are a sacred pilgrimage place of the Jains.

Of the five shrines in this group, four are architecturally significant. They are built with white marble stones. Each has a walled courtyard. In the centre of the courtyard is the shrine with the image of the deity, Rishabhdev. Around the large courtyard, there are numerous small shrines, each housing a beautiful image of the tirthankaras with a series of elegantly carved pillars from the entrance to the courtyard. The ministers of the Solanki rulers of Gujarat had constructed all these temples during 11thand 13th centuries A.D.

Vimal Vasahi is the oldest temple, which has been dedicated to Adinath, the first Jain tirthankara. Vimal Shah, minister of the then Solanki ruler of Gujarat, built it in the year 1031 A.D. The special feature of this temple is it’s ceiling which is circular in eleven richly carved concentric rings. The central ceiling of the temple is adorned with magnificent carving and it culminates into an ornamented central pendant. The pendant of the dome tapers down forming a drop or point, like a lotus flower. This is an astonishing piece of work. It symbolizes the divine grace coming down to fulfill human aspirations. Figures of 16 Vidya Devis (goddesses of knowledge) are carved on the ceiling.

The other Dilwara temples are the Luna Vasahi, Vastupala and Tejapala, named after the ministers of the then Vaghela ruler of Gujarat who built them in 1230 A.D. Inspite of being plain and austere on the outside, the interiors of all these temples are covered with delicate carvings. Its most notable feature is that the brilliant intricacy and delicacy of the marble carving is so fine that in places the marble becomes almost transparent.

Dilwara temples are one of the best examples of craftsmanship, the genius of carving out so brilliant and intricate a shape out of a block of stone, such that it almost comes to life! The temple is a tourist’s paradise and a meditative sanctum for the devotees.

Odishan temples:- The important Religious institutions of Odisha are:-

This is a UNESCO World Heritage Sight. It was recorded this is a test in 1984. One of the most stunning monuments of religious significance, a true masterpiece of architecture proudly stand in the form of sun temple at Konark. It’s a culmination of Kalinga architecture. The corner temple is dedicated do the sun god. Built in 13th century by king Narasimhadeva, the temple is designed in the shape of a colossal chariot with six horses and twenty four wheels, carrying the sun god, Surya, across heaven. The temple it build of black marbel and thus, is also called the blade pagoda.

Jagannath temple in Puri belongs to the 11th century and enjoy the honour of being one of the four dhams of Hindu religion. The main deities are Lord Jagannath, Lord Balabhadra and Goddess Subhadra. The temple was built by Raja Ananta Varman Chodanganga Dev in 12th century.

The two gods and a goddess of the temple are ornamental in accordance with the occasion and season. Best structural design of the temple can be found to be in pyramidal shape. Extending to a height of 214 feet it is one of the tallest temple structures in India. Architecture of the temple shows a huge similarity to Kalinga temple architecture.

Only Hindus of India origin are allowed to enter into the temple premise and held Pooja. Other belief about the temple is that in Kiriti Yuga the actual image of temple god had power of granting Moksha to anyone  who witnessed it. Yamaraj didn’t find it just, so he decided to keep the image to some distant corner of earth. However, as Dvapar Yuga arrived , the idol that is worshipped today in Jagannath Puri was constructed by Lord Vishnu with the help of wooden logs and despite the lacking hands it doesn’t lead to a difference in God’s power.

The main attraction of temple is the annually held Rath yatra.The images of gods are carried in three huge and decorated Chariots in a procession. The history of Jagannath  Rath Yatra is about thousand year old and all these years that has not changed is its religious fervour, colourful rituals and unique tradition. The Rath Yatra is world famous and attracts more than million pilgrims annually.

It is located in Bhubaneshwar. It is one of the oldest temples in Odisha. The most unique fitted of the temple is it’s sanctuary tower. The semi -cylinderical shape of it’s roof is a leading example of Khakhara order of temples bears an similarity to the Dravidian gopuram of the South Indian temples.

Another striking feature of the temple is tantric Association, the 8 armed goddess Chamunda. The presidng deity, goddess Chamunda sits on a corpse flacked by a jackal and an owl and decorated with the garland of skulls. She holds a snake, bow, shield, sword, trident, thunderbolt and an arrow and is piercing the nake of the demon. The niche is capped by a chaitya window containing  seated figures  of  Lord Shiva and Goddess Parvati. The tantric character of the temple is also marked by the stone post, to which sacrificial offerings were tethered.

This is the biggest and most celebrated temple of Lord Shiv in the entire Odisha. The temple complex is gigantic in size and covers a huge area. The man is structure in the temple is 180 feet tall and is incircled by a 7 feet thick wall. There are around 100 shrines on the open courtyard. The presiding deity of the temple is God Harihara, a combined form of Loed Vishnu and Shiva. This temple is one of the finest example of Kalinga architecture.

Architecturally, the temples of Odisha can be resolved into 3 broad styles as Rekha, Pidha and Khakhara. Most of the temples of the first two orders have two main components the sanctum, with a convex curvilinear spire and an entrance porch or assembly halls, characterised by a stepped pyramidal roof. The bigger temples may have two to three of these Porches- usually a dance hall and a hall of offering. A Khakhra  style is distinguished by a barrel elongated roof, called Khakhra, the local name of a variety of pumpkin- guard.

The outside of the temples are profusely decorated with sculpture relief broadley classified as- hieratic deities, human beings, geometrical, birds and animals and the floral patterns etc.