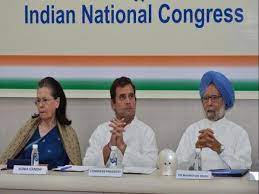 . The 1930s witnessed the rapid growth of socialist ideas within and outside the Congress.  In 1929 there was a great economic slump or depression in the United States which gradually spread to the rest of the world.  Everywhere in the capitalist countries there was a sleep decline in production and foreign trade, resulting in economic distress and large scale unemployment. At one time, the number of unemployed was 3 million in Britain, 6 million in Germany, and 12 million in the United States.

On the other hand the economic situation in the Soviet Union was just the opposite. Not only was there no slump, but the years between 1929 and 1936 witness the successful completion of the first two Five-Year Plans which pushed up the Soviet industrial production by more than four times.  The world depression, thus, brought the capitalist system into disrepute and drew attention, towards Marxism, Socialism, and economic planning. Consequently, socialist ideas began to attract more and more people, especially the young. The workers and the peasants.

It was Jawaharlal Nerhu who played the most important part in the popularising the vision of a socialist India both within the national movement and in the Congress the left-wing tendency found reflection in the election of jawaharlal Nehru as president for 1929, 1936 and 1937 and of Subhas Chandra Bose for 1938 and 1939. Nehru argued that political freedom must mean the economic emancipation of the masses, especially of the toiling peasants from feudal exploitation.