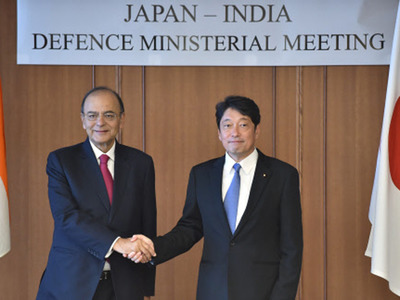 Nature, types and Problems of Unemployment in India:-Unemployment may be defined as “a situation in which the person is capable of working both physically and mentally at the existing wage rate, but does not get a job to work”.

India is one of those ill-fated underdeveloped countries which is suffering from a huge unemployment problem. But the unemployment problem in India is not the result of deficiency of effective demand in Keynesian term but a product of shortage of capital equipment’s and other complementary resources accompanied by high rate of growth of population.

Present unemployment problem in India is mostly structural in nature. 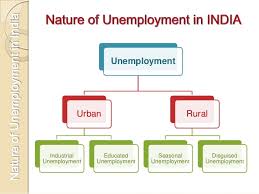 Voluntary unemployment arises when an individual is not under any employment out of his own desire not to work. Could be from their total apprehension towards the concept itself, or it may be that an individual is unable to find work paying his desired wages and he doesn’t want to settle.
Involuntary unemployment encompasses all those factors that prevent a physically fit individual willing to work from getting an appointment. According to John Maynard Keynes, “involuntary unemployment arises due to insufficiency of effective demand which can be solved by stepping up aggregate demand through government intervention”. Involuntary Unemployment is further categorized into subheads;
1. Structural: Such employment stems from any structural change in the economy that leads to decline of specific industries. Long term changes in the market conditions, reorganization of the same, and sudden changes in the technological sector, creates a Skill Gap in the existing workers.
2. Regional: Globalization and relocation of jobs also leads to unemployment as workers are often unable to move to the new location where the employers currently hold positions.
3. Seasonal: In some industries production activities are season best and employment occurs only in peak seasons. Agro-based industries and tourism industries are examples of this form of unemployment.
4. Technological: This type of unemployment is either generated following the introduction of technologically advanced mechanization that renders manual labour redundant, or through inclusion of technology that the current labour force is ill-adapted to.
5. Frictional: This type of unemployment happens when the labour is either transitioning between jobs or is trying to find a job more suited to their skill set. Friction is generally referred to the time, energy and cost that a person invests while searching for a new job.
6. Educated: This form of unemployment happens when people with advanced degrees are unable to procure an engagement that is suited to their level of training.
7. Casual: Some occupations can only offer temporary employment to individuals and their engagements are subject to termination as soon as the demand subsides. Daily labourers who work on a day-to-day basis are example of such types of unemployment.
8. Cyclical: This type of unemployment refers to the periodic cycle of unemployment associated with cyclical trends of growth in business. Unemployment is low when business cycles are at their peak and high when the gross economic output is low. Several external factors like wars, strikes and political disturbances, natural calamities that affect business cycle are also contributors to cyclical unemployment.
9. Disguised: This is a scenario when more people are employed in a job than is actually required for it. This is hallmark of developing economies where availability of labour is abundant. It is primarily a feature of the agricultural and unorganized sectors.
Problems caused due to unemployment

 Unemployment and poverty goes side by side. The problem of unemployment gives rise to the problem of poverty.
 Young people after a long time of unemployment find the wrong way to earn money.
 To get rid from the unemployment stress, they accept alcohol or drugs.
 Unemployed youths accepts suicide as the last option of their life
 Lower economic growth
 Increase rate in Crimes. As the employed youth don’t have anything to do they start doing robbery, murder etc.
 Health issues i.e it affects mentally as well as physically