Civil service refers to the body of government officials who are employed in civil occupations that are neither political nor judicial. The concept of civil service was prevalent in India from ancient times. The Mauryan administration employed civil servants in the name of adhyakshas and rajukas.

The examination for civil servants in those days too was very stringent as quoted by Kautilya’s Arthasastra. The expanse of the territory and the need to hold it intact made it imperative for the Mauryan administration to recruit civil servants based on merit. The concept of civil service again came into prominence when the British in search of creating a framework to hold the territories of India, created the much coveted ‘Indian Civil Services’ or the ICS.

Many changes took place in Indian Civil Services since Lord Cornwallis introduced it in India. The Indian Civil services were created to foster the idea of unity in diversity.

The civil service was expected to give continuity and change to the administration no matter the political scenario and turmoil affecting the country. Indian civil service has also played the part of giving this continuous support to the nation. But what is appalling and needs a serious consideration is the element of ‘change’.

It can be said that the civil service as a whole has maintained its status quo instead of sweeping changes in social and economic scenario. Some may argue that it is the resilience of the civil service, but it is an obvious fact out in the street that the Indian civil service was not able to deliver service based upon the expectations of the people or the founding fathers of the Constitution.

The civil service is an integral part of administration and the structures of administration too deter the way the civil service functions. Civil Service reform is deliberate change efforts by government improve its capacity to effectively and efficiently execute policies. Reforms in the Civil Service occurred ever since the Chinese invented bureaucracy – they are a continuous process with no g starting point, and equally no end.

The Indian bureaucracy, with its national character, has been a strong binding force to a Union States. The institution of civil service has rendered yeoman service to the overall socio-economy development of the country. 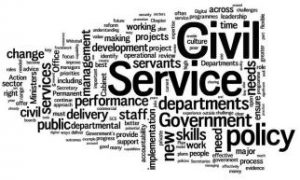 It has been at the forefront of development process right from the ‘comma heights regime’ to the ‘liberalization and de-regulation era’. It has not only played a pivotal role in desi and activating policies but also ensured basic service delivery at the cutting edge of government-cit interface.

The importance of the Civil Service to governance stems from the following:

» Service presence throughout the country and its strong binding character

» Administrative and managerial capacity of the services

» Effective coordination between institutions of governance

» Leadership at different levels of administration

» Provide ‘continuity and change’ to the administration.

In recent times, there has been accelerated change globally brought about by technological advance greater decentralization and social activism. The ramifications of these changes are being felt government in the form of increasing expectations for better governance through effective service deli\| transparency, accountability and rule of law.

The civil service, as the primary arm of government, keep pace with the changing times in order to meet the aspirations of the people. The purpose ‘reform’ is to reorient the Civil Services into a dynamic, efficient and accountable apparatus for p service delivery built on the ethos and values of integrity, impartiality and neutrality. The reform is raise the quality of public services delivered to the citizens and enhances the capacity to carry out government functions, thereby leading to sustainable development.

Prior to developing the contents of Civil Service Reform, there is a need for an open, objective st taking of the current situation.

India’s massive bureaucracy is maintained at huge cost by the country’s taxpayer whose average income is among the lowest in the world. But the public perception about the members of the services, who function at cutting edge and higher coordinating and policy making levels, is that they burdensome low-performers’ heading a highly bloated bureaucracy, which is, often, perceived to corrupt and inefficient in governing the country.

It is well recognized that Civil Service Reform is not only necessary but also inevitable. It has much value in governance as in socio-economic development.