The greenhouse effect is a natural phenomenon that insulates the Earth . Incoming solar radiations are absorbed and reemitted back from the Earth’s surface as infrared energy, greenhouse gases (GHGs) in the atmosphere prevent some of this heat from escaping into space, instead reflecting the energy back to further warm the surface. Human activities that produce GHGs (anthropogenic) amplify the greenhouse effect. Anthropogenic GHG emissions are modifying the Earth’s energy balance between incoming solar radiation and the heat released back into space, resulting in climate change. Gases such as CO2 , NO2 , CFCs (chloro fluorocarbons) allow sun rays to pass through them but then absorb and reradiate the heat back towards the earth. These are therefore termed as green house gases. 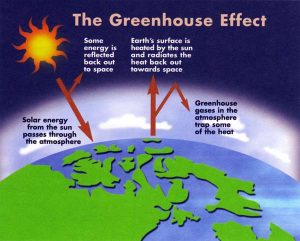 The amount of solar energy absorbed or radiated by Earth is modulated by the atmosphere and depends on its composition. Greenhouse gases—such as water vapor, carbon dioxide, and methane—occur naturally in small amounts and absorb and release heat energy more efficiently than abundant atmospheric gases like nitrogen and oxygen. Small increases in carbon dioxide concentration have a large effect on the climate system.