The main purpose of The Water Prevention and Control of Pollution Act is to levy and collect cess on water consumed by certain categories of industry specified in the schedule appended to the Act. The money thus collected is used by CPCB and SPCBs to prevent and control water pollution.

The Water Prevention and Control of Pollution Act provides for constitution of central and State Boards for preventing water pollution, power to take water samples and their analysis, discharge of sewage or trade effluents, appeals, revision, minimum and maximum penalties, publication of names of offenders, offences by companies and Government departments, cognizance of offences, water laboratories, analysis etc. 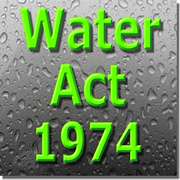 Prevention and control of water pollution is achieved through a permit or ‘consent administration’ procedure. Discharge of effluents is permitted by obtaining the consent of the State Water Board, subject to any condition they specify. Any person who fails to comply with a directive of the State cannot, however, entertain in suit under this Act unless the suit is brought by, or with the sanction of the State Board.

Functions of Central Board:

1. Subject to the provisions of this Act, the main function of the Central Board shall be to promote cleanliness of streams and wells in different areas of the States.
2. In particular and without prejudice to the generality of the foregoing function, the Central Board may perform all or any of the following functions, namely:

a) Advise the Central Government on any matter concerning the prevention and control of water pollution
b) Co-ordinate the activities of the State Boards and resolve disputes among them
c) Provide technical assistance and guidance to the State Boards, carry out and sponsor investigations and research relating to problems of water pollution and prevention, control or abatement of water pollution
d) Plan and organize the training of persons engaged or to be engaged in programmes for the prevention, control or abatement of water pollution on such terms and conditions as the Central Board may specify
e) Organize through mass media a comprehensive programme regarding the prevention and control of water pollution
(perform such of the functions of any State Board as may be specified in an order made under sub section(2) of Section 18)
f) Collect, compile and publish technical and statistical data relating to water pollution and the measures devised for its effective prevention and control and prepare manuals, codes or guides relating to treatment and disposal of sewage and trade effluents and disseminate information connected therewith
g) Lay down, modify or annul, in consultation with the State Government concerned, the standards for a stream or well
(Provided that different standards may be laid down for the same stream or well or for different streams or wells, having regard to the quality of waterflow characteristics of the stream or well and the nature of the use of the water in such stream or well or streams or wells)
h) Plan and cause to be executed a nation-wide programme for the prevention, control or abatement of water pollution
i) Perform such other functions as may be prescribed

3. The Board may establish or recognise a laboratory or laboratories to enable the Board to perform its functions under this section efficiently, including the analysis of samples of water from any stream or well or of samples of any sewage or trade effluents.

Functions of the State Boards:

i)?for the prevention, control or abatement of discharges of waste into streams or wells
ii)?requiring any person concerned to construct new systems for the disposal of sewage and trade effluents or to modify, alter or extend any such remedial measures as are necessary to prevent, control or abate water pollution

l) To lay down effluent standards to be complied with by persons while causing discharge of sewage or sullage or both and to lay down, modify or annul effluent standards for the sewage and trade effluents
m) To advise the State Government with respect to the location of any industry the carrying on of which is likely to pollute a stream or well
n) To perform such other functions as may be prescribed or as may, from time to time, be entrusted to it by the Central Board or the State Government.