In India, the price policy was first introduced in 1947 with the formation of Food grains Policy Committee which recommended a policy of progressive decontrol, reduction of imports or food grains and substantial increase in the production of foodgrains. Again in 1950, Foodgrains Procurement Committee was appointed which introduced the system of rationing and control in the supply of foodgrains in the country.

The Third Plan document rightly observed that, “The producer of foodgrains must get a reasonable return. The farmer, in other words, should be assured that the prices of foodgrains and the commodities that he produces will not be allowed to fall below reasonable minimum.” Accordingly, the foodgrains Price Committee was appointed in 1964. 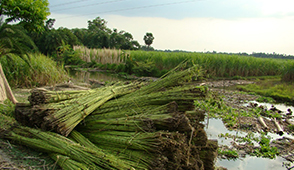 This committee recommended various measures such as:

In 1966, the government appointed another foodgrains Policy Committee which recommended the following matter in connection with the prices of agricultural commodities:

Moreover, in 1965, the Food Corporation of India (FCI) was set up for making necessary procurement, storage and distribution of foodgrains. In 1989-90, total capital employed in FCI was to the extent of Rs 5,138 crore with its total storage capacity at 18 million tonnes.

The policy of minimum support prices was accepted by the Fourth Plan but its effectiveness depends on the efficacy of the purchasing machinery like FCI and State Trading Corporation (STC). The Fifth Plan also formulated the agricultural price policy in order to meet two important considerations, i.e., firstly for providing incentive for sustained and higher agricultural production and secondly for inducing the farmers to plan the production of various crops as per estimated demand through discriminating manipulation of inter­crop prices relationship.

In order to build up buffer stocks, various public sector organisations would announce purchase prices at different times which would be higher than minimum support prices.

Again, the Sixth Plan realised the importance of price policy for agricultural development on the following grounds “Firstly, modern agriculture increasingly involves the use of costly inputs as part of improved technology and hence an assured minimum prices becomes a necessary underpinning for sustained agricultural production. Secondly, price policy is an important tool for facilitating crop planning, an aspect which so far has not received adequate attention in the country. Finally, price policy can be geared towards community are not eroded by continuing unfavourable terms of trade between the agricultural sector and non-agricultural sector.”

In 2011-12, the MSPs for various agricultural crops have already been increased. In the mean time, the MSPs of some major crops exhibit a rising trend in line with costs and as incentive for higher output.

Need of Agricultural Price Policy: Movement of price is a common feature. But rapid and violent movement or fluctuations in the prices of agricultural commodities have serious consequences on the economy of the country. As the sudden steep fall in the price of a particular crop, result in huge loss to the farmers producing that crop as their income declines.

This will force the farmers not to cultivate the crop next year leading to a serious shortage in the supply of that food item and that may force the government to import that food crop from foreign countries.

Price policy of the government for agricultural produce seeks to ensure remunerative prices to growers for their produce in order to encourage higher investment and production and also for safeguarding the interests of consumers by making available food supplies at reasonable prices.

The price policy of the country also seeks to evolve a balanced and integrated price structure in keeping with the overall needs of the economy.

In order to achieve this end, the government announces minimum support prices (MSPs) for major agricultural commodities in each season and also organises purchase operations through the Food Corporations of India (FCI), and cooperative and other agencies designated by state governments for the purpose.

In order to safeguard the interest of both producers and consumers a comprehensive agricultural price policy must be suitably formulated. This should be supported by maintaining buffer stocks of agricultural commodities alongwith the extensive network of public distribution system.

These will provide a minimum support price to the producers and arrange the supply of these agricultural produce to the consumers at fair prices. Thus while fixing the minimum support prices and procurement prices care must be taken to fix those prices at such level which will induce the farmers to produce more. Thus, the agricultural price policy can be designed as an “instrument of growth”.

Establishment of Some More Agencies

The agricultural price policy should be extended to cover more commodities over and above the 15 commodities covered at present. The commodities like pulses, potato, onion and other important vegetables and fruits may also be covered.

The prices of agricultural commodities should be fixed in the most rational manner so that it could cover the entire costs of production. While fixing the prices, the increasing cost of agricultural input should be taken into consideration.

The agricultural prices should be so determined that it can also protect the interest of the general consumers.

The agricultural price policy should be framed in such a manner so that it can induce the farmers to go for modernisation of their agricultural practices.