Karnataka is a state belonging to the South-west of India with a democratic government running the state. The elected body runs the administration of Karnataka with a Governor appointed as the constitutional head. The Governor is appointed for a five-year tenure will appoint the Chief Minister and even his council of members. The Governor holds the ceremonial head of the function to dictate the oaths to the ministers who are appointed.

Administrative Divisions of Karnataka and the Government

Legislative powers: Powers related to law-making and the state legislature

Discretionary powers: Powers to be carried out per the discretion of the Governor. 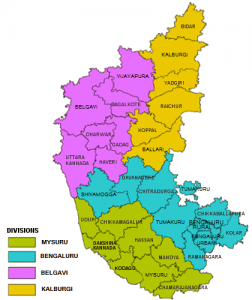 The Chief Minister is selected by the ruling party members of the Legislative Assembly. Though the Governor is the constitutional head of the state, it is the Chief Minister and his council of ministers who exercise most of the executive powers.

For ease of administration Karnataka state is divided into:

Bangalore being the capital city becomes the fifth largest urban conglomerate out of all the 23 metropolis conglomerate cities in India and one of the fastest growing city.

Karnataka state legislature is bilateral and consists of a Legislative Assembly and a Legislative Council. The Legislative assembly contains 225 members which are elected by the governor to represent the Anglo-Indian community. The term of office of elected representatives is five years and the term of council members is 6 years, of which one-third of the council members retire every two years.

Executives at the district level

The commissioner is assisted by the officers of the Karnataka Police Service or the Karnataka Police officials. There are others officers belonging to the state services who take care of various aspects in the state. The deputy conservator of forests preserves the forests and wildlife-related issues and concerns. The officer is from the Indian Forests service.

Most of the sector-wise development is considered by a group of officials like the Education, PWD, Agriculture, Health, Animal Husbandry etc.

Karnataka state is divided into 20 police districts which have 77 sub-divisions which include 178 circles. Around 5 Police Commissioners at Bangalore, Belgaum, Mangalore, Mysore and Hubli-Dharwar cities. Karnataka has a total of 696 police stations with 317 police outposts.

To maintain law and order in the state there are: