Microscopic organisms, commonly known as microorganisms or microbes, are found all around us and even inside our bodies. The category ‘Microbes’ includes a massive range of organisms including bacteria, fungi, viruses, algae, archaea and protozoa. Some of these, such as bacteria and fungi, are well known, but others such as archaea much less so.

The vast majority of microbes on the earth pose no real threat to humans, plants or animals; in fact they actually work alongside humans to make world go round, aiding decomposition, decay and even helping us to digest our food. However, there are some microorganisms which negatively impact our lives, causing illness, bad odours and damaging products and surfaces. Some of the names we regularly hear in the media are Salmonella, E.Coli, MRSA, Malaria and Bird flu.

The types of bacteria prevalent in an environment are determined by several factors. However, bacteria are found in every habitable place on earth. They survive in soil, rocks, oceans, volcanoes, and even arctic snow. Some have been found living in or on other organisms including plants, animals, and humans. The common types of bacteria found in buildings are not harmful when in low numbers. However, just like with mold, elevated levels of bacteria particularly the gram negative type are potentially a health hazard. 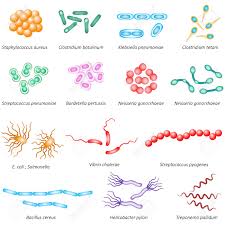 Virus, an infectious agent of small size and simple composition that can multiply only in living cells of animals, plants, or bacteria. The name is from a Latin word meaning “slimy liquid” or “poison.”

The earliest indications of the biological nature of viruses came from studies in 1892 by the Russian scientist Dmitry I. Ivanovsky and in 1898 by the Dutch scientist Martinus W. Beijerinck. Beijerinck first surmised that the virus under study was a new kind of infectious agent, which he designated contagium vivum fluidum, meaning that it was a live, reproducing organism that differed from other organisms. Both of these investigators found that a disease of tobacco plants could be transmitted by an agent, later called tobacco mosaic virus, passing through a minute filter that would not allow the passage of bacteria. This virus and those subsequently isolated would not grow on an artificial medium and were not visible under the light microscope. In independent studies in 1915 by the British investigator Frederick W. Twort and in 1917 by the French Canadian scientist Félix H. d’Hérelle, lesions in cultures of bacteria were discovered and attributed to an agent called bacteriophage (“eater of bacteria”), now known to be viruses that specifically infect bacteria.

The unique nature of these organisms meant that new methods and alternative models had to be developed to study and classify them. The study of viruses confined exclusively or largely to humans, however, posed the formidable problem of finding a susceptible animal host. In 1933 the British investigators Wilson Smith, Christopher H. Andrewes, and Patrick P. Laidlaw were able to transmit influenza to ferrets, and the influenza virus was subsequently adapted to mice. In 1941 the American scientist George K. Hirst found that influenza virus grown in tissues of the chicken embryo could be detected by its capacity to agglutinate (draw together) red blood cells.

A significant advance was made by the American scientists John Enders, Thomas Weller, and Frederick Robbins, who in 1949 developed the technique of culturing cells on glass surfaces; cells could then be infected with the viruses that cause polio (poliovirus) and other diseases. (Until this time, the poliovirus could be grown only in the brains of chimpanzees or the spinal cords of monkeys.) Culturing cells on glass surfaces opened the way for diseases caused by viruses to be identified by their effects on cells (cytopathogenic effect) and by the presence of antibodies to them in the blood. Cell culture then led to the development and production of vaccines (preparations used to elicit immunity against a disease) such as the poliovirus vaccine.

Scientists were soon able to detect the number of bacterial viruses in a culture vessel by measuring their ability to break apart (lyse) adjoining bacteria in an area of bacteria (lawn) overlaid with an inert gelatinous substance called agar—viral action that resulted in a clearing, or “plaque.” The American scientist Renato Dulbecco in 1952 applied this technique to measuring the number of animal viruses that could produce plaques in layers of adjoining animal cells overlaid with agar. In the 1940s the development of the electron microscope permitted individual virus particles to be seen for the first time, leading to the classification of viruses and giving insight into their structure.

Advancements that have been made in chemistry, physics, and molecular biology since the 1960s have revolutionized the study of viruses. For example, electrophoresis on gel substrates gave a deeper understanding of the protein and nucleic acid composition of viruses. More-sophisticated immunologic procedures, including the use of monoclonal antibodies directed to specific antigenic sites on proteins, gave a better insight into the structure and function of viral proteins. The progress made in the physics of crystals that could be studied by X-ray diffraction provided the high resolution required to discover the basic structure of minute viruses. Applications of new knowledge about cell biology and biochemistry helped to determine how viruses use their host cells for synthesizing viral nucleic acids and proteins.

Logic originally dictated that viruses be identified on the basis of the host they infect. This is justified in many cases but not in others, and the host range and distribution of viruses are only one criterion for their classification. It is still traditional to divide viruses into three categories: those that infect animals, plants, or bacteria.

Virtually all plant viruses are transmitted by insects or other organisms (vectors) that feed on plants. The hosts of animal viruses vary from protozoans (single-celled animal organisms) to humans. Many viruses infect either invertebrate animals or vertebrates, and some infect both. Certain viruses that cause serious diseases of animals and humans are carried by arthropods. These vector-borne viruses multiply in both the invertebrate vector and the vertebrate host.